What is a Jack Jumper Ant? 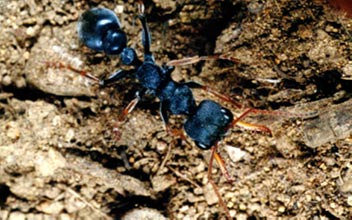 The ant most frequently associated with allergic reactions is commonly known as the Jack Jumper ant. These ants have a black body and orange/brown jaws/pincers and limbs.

Like bees and wasps, Jack Jumper Ants do not bite. Rather, they grasp the victim in their jaws, then bend and sting them. Their sting is in the tail. They are aggressive, typically walk with a hopping motion, and can sometimes jump from surrounding vegetation. The stings of Jack Jumper Ants can be very painful and local swellings are common. Large local swellings can also occur, which may last a few days at a time.

Jack Jumper Ants are found in Tasmania, Victoria, Australian Capital Territory, New South Wales (Snowy Mountains, Blue Mountains and coastal regions), South Australia (Adelaide Hills), and in some parts of Western Australia and Queensland. It is likely that there are other habitats which are yet to be identified.

Nests are often difficult to find

Jack Jumper Ants live in underground nests. Although established nests can form massive mounds, they are often difficult to find, and may be present under rocks, with the entrance surrounded by a pile of fine gravel. Typically, a couple of sentry ants are present at the entrance. The ants are aggressive, and often hunt alone.

They will stray away from the nest, and at times find their way into people's houses and kitchens. It is very difficult to avoid being stung by Jack Jumper Ants, when nests are located close to where people live or work.

Anaphylaxis is the most severe type of allergic reaction

Anaphylaxis occurs after exposure to an allergen (such as foods, insects or medicines), to which a person is already extremely sensitive to, and can be potentially life-threatening. Signs and symptoms of a severe allergic reaction to insect stings or bites include:

In some cases, anaphylaxis is preceded by mild or moderate allergic reactions, with signs and symptoms that include:

Anaphylaxis to Jack Jumper Ant stings is not rare

In areas where Jack Jumper Ants are common, population surveys have shown that 2-3% of people have had generalised allergic reactions, and in around half of these people the reactions can be life-threatening. Deaths from Jack Jumper Ant stings and anaphylaxis have occurred in Australia, with several recorded cases in recent years.  It is possible that deaths due to sting allergy are under reported.

Follow up studies have shown that around 70% of people with Jack Jumper Ant allergy will have another allergic reaction if they are stung again. This sensitivity to repeat stings appears to persist for many years.

There is currently no skin allergy test commercially available outside of ant allergy research programs.

A blood allergy test is available from SA Pathology in South Australia. Tests can be arranged with your doctor and local pathology laboratory. There may be a small out of pocket cost for this test, which detects around three quarters of cases of Jack Jumper Ant allergy.

Patients with allergic reactions to Jack Jumper Ants should:

Jack Jumper Ants are difficult to avoid, as they often stray long distances from the nests. Destroying nearby nests has been proposed to reduce the risk of accidental stings, but may not prevent stings from nests located further away. Wearing heavy clothing such as boots and gloves when in the bush or when gardening seems sensible, but the ants can still sting through heavy clothing. Whether moving from endemic areas to another area may help is uncertain.

Patients at risk of anaphylaxis should be referred to a clinical immunology/allergy specialist for assessment and advice. They should have an ASCIA Action Plan for Anaphylaxis, and know when and how to:

It is important to note that in some cases, more than one dose of adrenaline may be necessary. Even if the adrenaline autoinjector has been highly effective at relieving symptoms, continue to seek emergency medical care without delay. Subjects who have had anaphylaxis should be medically observed for at least four hours after the last dose of adrenaline.

Your doctor will prescribe the dose of adrenaline autoinjector most suitable for your needs.

Other measures for people allergic to Jack Jumper Ants

Commercial venom immunotherapy (VIT) extracts are available in Australia for the diagnosis and treatment of patients allergic to Honey Bees, Paper Wasps and European Wasps.

There is currently no commercial venom extract available for skin testing to confirm Jack Jumper Ant allergy or to use for immunotherapy (desensitisation) to switch off the allergy.

Australian doctors in Tasmania have shown that Jack Jumper Ant venom extracts are effective at switching off Jack Jumper Ant allergy, and preventing allergic reactions when patients were re-stung. This treatment is currently available in Tasmania, Victoria and South Australia.